We at MSN believe LNG, LPG, methanol, biofuel and hydrogen to be the most promising solutions for future marine fuels. For this reason we invest in research and development of methanol fuel systems.

As a systems integrator we provide engineering, procurement, construction and installation (EPCI) services. We design and build systems to meet your vessel’s functional design requirements and any specific wishes you may have. By following a risk based design process there is no need to wait for the low flashpoint fuels regulations to be fully developed and in place.

We keep you involved at every stage of the project, from a blank piece of paper to the end product. There’s no need for you to choose between various subcontractors, we have everything you need to make your project a success

By using methanol as marine fuel you can reduce emissions of nitrogen oxides (NOx) up to 60%, sulphur oxides (SOx) up to 99%, particle matter (PM) by 95% and carbon dioxide CO2 up to 15% tank to propeller (TTP). If you use green methanol your emissions will be CO2 neutral.

Nitrogen will be used for inerting of methanol tanks and the space in between the inner and outer pipe of double walled piping. A small nitrogen generator is used for the supply of nitrogen.

The full research paper can be found on the Green Maritime Methanol website. 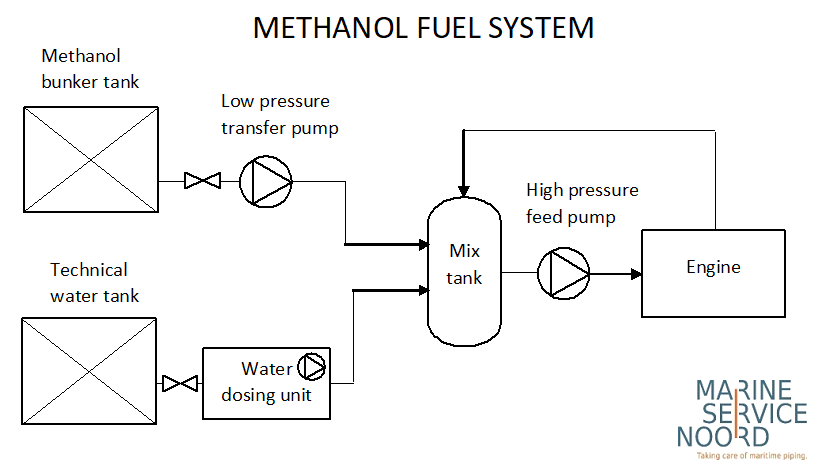 We´d love to help you develop a methanol fuel system for your next new build or refit project. Feel free to contact us to set up an exploratory meeting, or complete the contact form below to send us your questions or comments.

Questions about methanol as marine fuel?