With exhaust gas emissions being monitored closely and alternative fuels being on the rise, ship owners and shipping companies need to make a few choices before they order their next vessel. Do I go for LNG, hydrogen fuel cells or maybe methanol? When it comes to fuel storage, the energy density is a factor to take in consideration.

WHAT IS ENERGY DENSITY?

SO WHICH FUEL HAS THE BEST ENERGY DENSITY?

It should not come to you as a surprise that Marine Gas Oil (MGO) has the most favorable energy density, we have been using it for the last couple of decades. But with this option out of the question what is the second best option? In the chart below we included today’s most promising alternative fuels for the maritime sector (additional volume for containment e.g. insulation for cryogenic storage and cofferdams for methanol is not included). 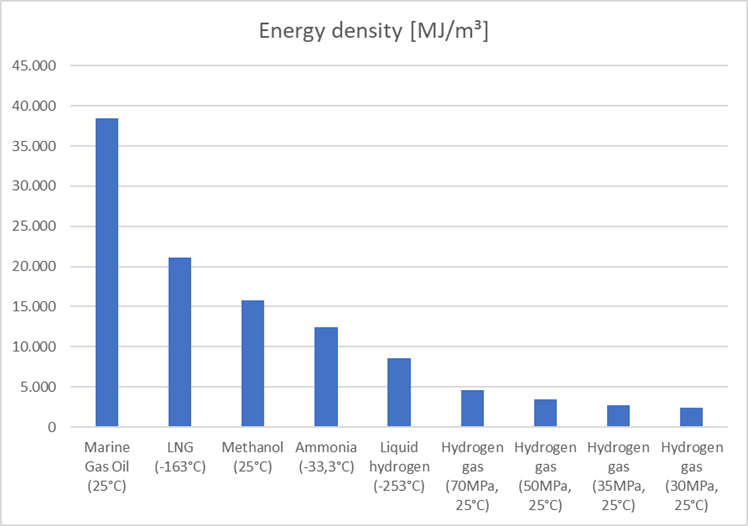 When looking on the chart it becomes clear that LNG is the best second choice when it comes to energy density however LNG requires containment at -163 degrees Celsius which is reflected in the CAPEX of the fuel gas supply system to be installed on your ship. If you want lower CAPEX with a fuel that can be bunkered at normal temperatures methanol is a good option, however keep in mind that when using methanol you need the double amount of fuel storage space to get the same energy as obtained from MGO. Although the use of hydrogen sounds attractive because it will give you zero emissions, keep in mind that it will take up around 4,5 to 16 times as much space as marine gas oil. We therefore often advise our clients that hydrogen is more suitable for low energy requirement over short sailing distances.

Questions on energy density and/or alternative marine fuels? We would like to hear from you.